Better learning with colour and light

“Through the conscious and scientific supported use of colour, light and surface materials kindergarten and school buildings could become even more valuable places of learning. For new construction or renovation projects, the right color input, with relatively low investment, is a decisive improvement for children and teachers.”

Different and changing environmental incentives are an important prerequisite for positive child development. This insight is accepted by experts. However, the fact that the relevant knowledge should also be incorporated into the design of kindergartens and schools has by no means prevailed everywhere to the same extent. Educational scientists and environmental and colour psychologists actually know how a fruitful learning environment for children should be optimally designed. It’s just a pity that architects and construction managers far too rarely make use of this knowledge. For this reason, teachers should try to actively influence the planning and design process when renovating and constructing kindergartens and school buildings, if possible accompanied by environmental and colour psychologists. As experts, the teachers have a sensorium for the scientifically supported connections and as future users they are interested in the fact that their future working environment optimally supports them in their daily work and that they themselves feel comfortable at their workplace.

Starting from the needs of users

A human-centred architecture should be based on the needs of the user groups concerned. For children who, by entering kindergarten, perhaps for the first time spend a large part of their everyday life outside their familiar surroundings, it is of central importance that they can experience security and security. With regard to the spatial environment, this is achieved through well structured, comfortably furnished rooms in which familiar things can be found in a familiar place. For younger children, therefore, only limited efforts should be made to design school rooms that are as flexible as possible in terms of furniture and maximum changeability and adaptability, in keeping with the spirit of the times.

It is probably not groundbreaking news that retreat options are important in all-day kindergartens as protection against stimulus flooding. The planning of appropriate hiding places and hiding places or a room design that supports the construction of such refuges by the children is already being implemented today.

Much less common, on the other hand, is the fact that not only the spatial structure but also the colour design and use of light and surface materials have a decisive influence on the quality of the future learning location. It has been proven that colour, in addition to its known effect on the psyche, also influences physiological processes. Although the relevant processes that take place in the body have not yet been researched in detail, it can be said that colour perception can measurably stimulate brain waves, affect the autonomic nervous system and trigger the production of certain hormones. Colours can be used to produce irritation-intensive or low-irritation situations. Rooms that are painted uniformly in white or grey have a strongly monotonous effect on people and tend to cause under-stimulation or low irritancy. The opposite is extreme complexity, which would lead to overstimulation or sensory overload.

This can be created by using differently saturated colours in conjunction with irritating floor, wall or ceiling patterns. Studies show that a longer stay in a tensionless environment can trigger signs of restlessness and irritability, concentration difficulties and even perceptual disturbances. In the case of a sensory overload, a change in respiratory and pulse frequency as well as blood pressure can be detected. A balanced design, which sets the right level of optical stimuli, should therefore also be aimed at, because small children in particular are particularly sensitive to these influences.

The effect of the colour is universal

Often too little use is still made of the property of colour as an aid to spatial orientation. In large school buildings or kindergartens, younger children in particular can find it easier to enter a foreign world if the spatial structure is made visible in the entrance area and on generally accessible traffic areas such as corridors through the targeted use of different colours. Apart from a few cultural differences in interpretation – white, for example, is regarded in Asia as the colour of mourning, while here it is regarded as the colour of innocence – colours trigger comparable reactions in most people. Man’s experience in nature obviously leads to fundamental associations. This obviously universally valid effect of colours has been established in various cross-cultural studies. Thus, when designing learning worlds, one does not have to take cultural considerations into account.

Colour and light in interplay

The effect of colours depends on the correct use of light. This aspect is already taken into account during the planning phase to put a lot of weight on this. If possible, daylight should be used as a light source. When a school in New York abandoned windows and a schoolyard for outdoor use at the end of the 1960s in order to facilitate learning by eliminating environmental influences, this led to developmental disorders, phobias, neuroses and aggressive outbreaks in the children. And the teachers also suffered from physical and psychological illnesses. Particularly for smaller children, it is advisable to provide subdivided window areas (e.g. lattice windows) instead of large, unstructured windows.

The incident light thus creates plays of light and shadow on the floor and walls, which constantly change with the position of the sun, making it easier for children to experience the light and find their way around the room. This effect is enhanced by the use of coloured glass or coloured foils. The possibility of differentiating the incidence of light according to the activity is indispensable for the teacher. Because smaller children can lose their sense of security through large windows, the use of structured window types is also recommended for this reason. As a connection to the outside world, windows have another important function.

It is important to link the children’s world with the natural environment surrounding the schoolroom. If the nature reference can not be produced in this way, because the environment does not permit this, indoor plants or a gently splashing fountain in the classroom can at least serve as a makeshift substitute.

When designing kindergartens and school buildings – both new buildings and conversion projects – it is advisable to consult a qualified colour consultant and designer. He guarantees the conscious use of colour, light and surface materials based on scientific findings and pays attention to a relatively small investment in relation to the building sum. In addition, it ensures that the needs of future user groups are adequately incorporated into the planning process from the outset. In line with his professional philosophy, he endeavours to give teachers, toddlers and schoolchildren suitable free space so that they can make the rooms their own with personal accents in everyday kindergarten and school life.

Martin Tanner is a graduate colour consultant and designer at IACC, working in various architectural design fields and internationally networked with design partners in Austria, the USA and Canada. 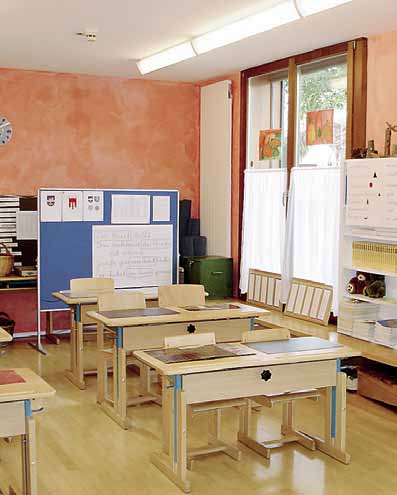 A well thought-out colour concept has a positive effect on the learning atmosphere.

Published in: 4 to 8, September 2010, Trade Journal for Kindergarten and Lower School