As with people, the first impression counts when it comes to residential buildings. Facades should therefore be designed to be sophisticated and adapted to the surroundings. Even a previously neglected part of a building is increasingly coming into focus.

Homeowners regularly get angry when their buildings are sprayed with graffiti without permission. What the authors may perceive as art, the real estate owners mostly see as damage to property. Graffiti has not only increased in Switzerland, but in many other countries, too, house walls are often no longer safe from this form of vandalism. This is also the case in New Zealand. That’s why the University of Otago, Dunedin, investigated some years ago whether graffiti can be prevented – not with security guards or police, but with a sophisticated design. The result: it works.

Design instead of graffiti

In the scientists’ experiment, a wall in a narrow passageway was decorated with a large painting. The interesting thing about it was that while the opposite wall was decorated with several graffiti, the area decorated with colors was spared. Three months after the beginning of the experiment, no sprayer had yet tried to redesign it in his sense. Even the area directly next to the painting had been sprayed less than the wall on the other side. The researchers concluded that colored walls made vandalism less likely.

This is obviously due to the fact that aesthetically sophisticated surfaces have a pleasant effect on people. They therefore increase the attractiveness of buildings. But this also applies to the residents of these properties or potential buyers. Facades offer them the first impression of an apartment house, for example. If it is positive, a purchase becomes more likely.

This effect is rarely achieved with grey exposed concrete or exposed aggregate concrete facades. Especially in the cold season, they are boring and repellent, especially in large buildings. On the other hand, warm colours can create a feeling of well-being – for the residents themselves, but also in the neighbourhood.

The personal colour preferences of the residents must not, however, be the sole criterion in the design decision. Cultural, historical, architectural and even climatic aspects should also be included in the conceptual planning of large buildings. They generate identification and thus have a decisive influence on people’s satisfaction with their home and thus on the length of time they stay there.

It is also important to use colours, construction materials and an architectural style that corresponds to the social and cultural habits of the region. The facade colours should be chosen in such a way that they harmonise with those of the neighbouring houses. This is especially true for nearby historical buildings, too much deviation would disturb the atmosphere of the area. However, if residential complexes are built in new, previously undeveloped areas of a municipality, the choice of colour may be more free.

The first impression of a building depends not only on the façade, but also on the access. At this point, something has changed fundamentally in recent decades, at least with new buildings. In the past, the main entrance was the first business card of a residential building to be noticed by visitors. The door, the porch or the foyer: architects and owners attached great importance to a sophisticated design. This is still the case today, but another part of the building has almost outstripped the main entrance: the underground car park. It has become much more important due to car traffic, at least in buildings with several or many residential units.

In order not to let the public space suffocate under parking cars, most new buildings now have underground garages. Residents often no longer enter a house on foot, but drive into the basement by car. One consequence of this is to give this area a more positive image – in terms of design and safety. Such rooms must therefore no longer be dark and damp and, above all, appear dangerous to women. Instead, they should be friendly, inviting and bright.

In addition to adequate lighting, this effect can be achieved above all by means of colours and colour-coded lettering or signals to stairways, for example. When used correctly, colours not only change the ambience of a room but also provide orientation. This significantly reduces tension and anxiety in underground car parks.

However, this is not enough to make residential units in new buildings attractive to buyers. This is why many sellers rely on so-called home staging, i.e. the temporary furnishing of a kind of model apartment. However, the costs should be kept as low as possible. This can be achieved in particular with the innovative Ambience mobile™ design system. Colours are not applied directly to the walls of the housing unit, but rather to lightweight panels, canvases or special fabric panels. The designer can then apply these to the walls with little effort.

The special thing about this is that the coloured surfaces can be easily removed and reassembled at a different location – they can therefore be used in many different ways. Construction companies or brokers can therefore take Ambience mobile™ materials with them to the next building at any time. 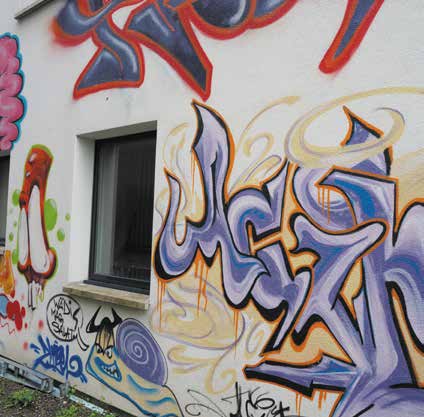 Scientists found out that white, grey and beige painted walls are usually not spared from graffiti. 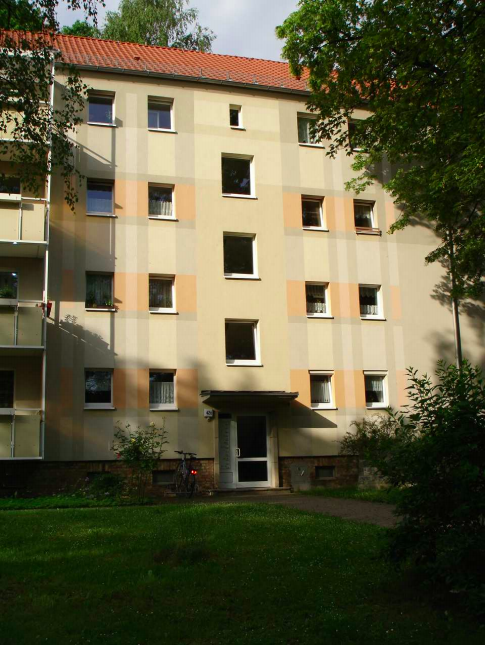 Scientists found that walls designed with colors are usually spared from graffiti.